Something we wonder about, but may not want to hear. People talk, they see and judge, either in our favor or not. Their viewpoint may be skewed, taking offense when none was offered. They may judge us for things we never did, good and bad things alike.

I try to keep a low profile,  not draw attention to myself and I think I succeed overall. I’m rather proud of my obscurity.

Last night my dad was talking to one of his nephews. He mentioned us, his daughters, and my ears went up like a Chihuahua’s when he said “the oldest one.”

So what did he say, my dad, a person who knows me fairly well and who lives in the same house?

He mentioned Jerry, saying he died 3-4 years ago (it will be 3  years in July). He said I’m alone and I go to a different church. My family are Southern Baptist and I’m Catholic, so that’s a bit of an understatement.

My identity is based on my status as a widow. I’m alone. My sisters are married and he went on at length about their husbands. I got nothing. I am not angry or offended that my dad defines us by our marital status. Much. It’s the way he is, he is the product of a conservative rural background and another time.

His nephew didn’t want a long detailed description of us, my dad just hit the high points, so to speak. I got off lightly. He could have been nicer but he could have been meaner too. I’m used to the Catholic thing. Though it bugs me that I’m labeled as less than because I don’t have a husband.

For me, anyway. For some people, short little hike, no big deal. I did my morning walk, I walk about 3 days a week and this is my longest walk of the week because I have more time. More time to do and to recover.

I took a bottle of water, room temperature,  with me and I’m glad I did. It was awkward carrying it and I need to wear pants with pockets. Although it’s only 79 degrees F I am sweating like a politician on the witness stand. I even sweated off my eyebrows.

Besides sweating a lot, I feel accomplished. It takes effort, just making myself get up and drive to the river was hard today. I knew I was going to do 6 miles and that I haven’t walked that far in almost a year. I managed 5 miles but one more was intimidating and a little frightening. I told myself I could do this, I could go slow, I could rest if I needed, it’s okay.

I did stop once, to go pee between a couple of fir trees. Got pee on my leg, poked by a tree branch and hoped nobody saw me, especially the truck passing on the bridge on my left.

As I turned around and started back I said “you’re more than halfway there.” I repeated it and checked off the streets and bridges as I passed them on my way back. Once I made it to my car and changed my shoes I began thinking about the other stuff I need to do today. After I conquered this, and I feel conquer is the right word, I feel like I can do anything now, today.

Yeah, I need to pluck those brows. 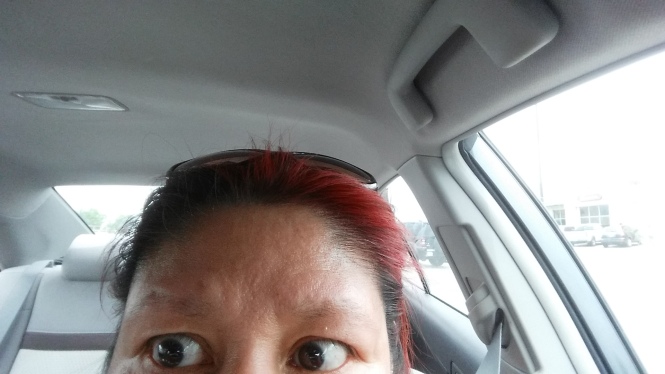 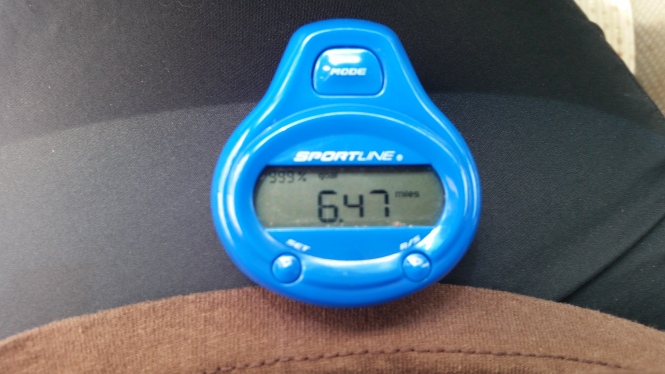