I really wanted to write a detailed post about my trip to Saigon but I’ve been fighting a bad case of diarrhea, in its second day. Truly this is not how I pictured my New Year’s Eve.

It is already 2016 in Saigon; Bear texted me from the future. I finally took a shower and will sort everyone’s souvenirs. It’s taking me awhile, being dehydrated and running to the bathroom and hopefully making it in time is about all I’ve been able to do.

I’m dealing with some culture shock: some is nice, like being able to speak the language and some like processed food that doesn’t taste right is not so good. There will be more, after I manage to leave the house but I’m still weak and feel tired. I’m glad I went,  think I’m glad to be home but that’s it.

It was a trip of a lifetime. I ate a lot of really good food, saw stuff few

(Alley, with scruffy little dog I wished I could bring home with me)

westerners see, saw impressive buildings like the Bitexco tower, which blows the Space Needle away, sorry. I also saw incredible poverty and terrifying traffic. I saw Star Wars twice.  I met Bear’s girlfriend and fortunately for us all, really like her. I even took a few pictures. 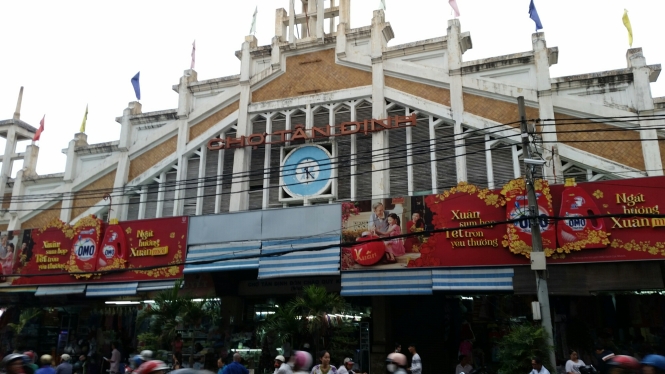 Market, forget which one

I’ll post about those things more, when my body has adjusted and I don’t feel like warmed over crap. 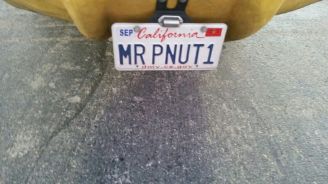 I ran my last minute errands today: going to the bank, mall, grocery store and ultimately deciding to get a pedicure because my feet looked scary. I had 2 diet cherry limeades, which helped me drive through rush hour/Christmas shopping traffic. On the way back I saw this in the parking lot of a gyro place, turned around and took the pictures. I got out of my car, still wearing the paper thin flipflops from the nail salon, in 40 degree weather to do so.

I’ve been packing, trying to get Christmas stuff done and hoping I don’t forget anything important. I got the Little Debbies and hominy for Bear so I’m probably good. I’ve had minor freak-outs, like finding out his shoes won’t arrive before I leave, not getting my KFN in the mail for the TSA pre check and finding a plastic deviled egg plate. But it’s okay, I bought a back up cheap pair of shoes, found my KFN online and went to 3 thrift stores before finding the plate.

These guys are coming along with me, per Bear’s request.

My Martha Stewart/Pinterest moment, I found a couple of gifts at a thrift store and then realized I needed to buy gift bags. I bought these stockings there, they cost less than a buck apiece. All I did was stuff the top with tissue paper and slap on a nametag. Done. 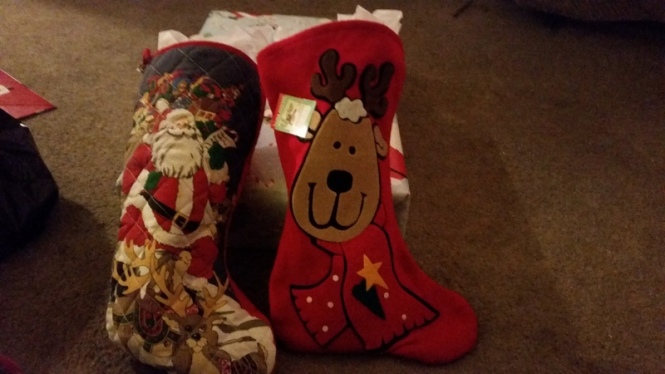 I make my Scooby Snacks tomorrow, do last minute laundry and finish packing. That should be it but probably not; controlled chaos is what I’m used to and expect. My main worry is that Olive and I will sleep in Monday morning and I won’t get to the airport in time. But I will probably be too nervous to sleep much anyway.

I look forward to seeing Bear, to going someplace I’ve never been before. I’m also leaving most of the unpleasant bits of Christmas behind– the cooking, cleaning up, and the awkwardness– and that’s a relief. Last Christmas was not good, Bear and I didn’t want to do anything or go anywhere so we didn’t. This year is different but as I’ve planned my trip I’ve felt a little remorse that Jerry can’t be there. I know that even if he hadn’t passed away he wouldn’t have been well enough to make the trip. He admitted traveling was not his thing, even when he was healthier it wasn’t. Anything beyond a road trip to Dallas was too much. If he was still here he’d probably want me to go, for me and Bear to skype with him and take lots of pictures but he’d feel better at home. His doctors would probably advise against it, too many risk factors. If he was still here I don’t think I’d go, I’d feel badly leaving him alone and worry something might happen. It’s not an issue, I can go but I wish he could be there, to see Bear in his new natural habitat, experience what has only been described and we could all see Star Wars. I feel guilty I can go and do this and he can’t.

I am old, but I don’t feel it. At least not until it’s pointed out to me. Today I had a mammogram. There’s a sentence that makes women, usually Of a Certain Age, make a face. Besides the squishing of my breasts, I had a flu shot and for the first time colonoscopy was brought up. Because I am at that magic age where it’s believed old age starts to settle in and slowly take over.

I talked to my friend Lucy s mom on Saturday. We were at a funeral for another friend’s mom and waiting. Lucy’s mom said something I can’t forget. She said she once thought 60 was the youth of old age but now sees 60 as the old age of youth, when everything starts to go. As she is in her 80’s I imagine she knows what she’s talking about. One of her daughters is turning 60 next year and the realization made her sigh. Incidentally Lucy’s mom is still going and doing and having a life though it’s taking more time and effort now. She said she’s going to funerals for her contemporaries more and more.

Instead of depressing me it cheered me a little,  since this means I’m still young, relatively speaking. It also means I’ve probably got another good ten years or so left.  I hope to still be doing yoga and 5Ks. I don’t plan to have gray hair either.

It amuses me to see people in their 20’s with dyed gray or silver hair. Some look good. I think they will be dyeing their hair like me when they are my age and gray will not be so appealing then.

I’ve learned that those pumped up inspirational quotes and memes about the mental aspect of exercise and training are really true. I’ve known it on a superficial level for years but secretly considered most of it hype and hyperbole. The physical is more important; without the ability there’s no game, no results no matter how positive your mindset.  Or so I thought.

In the past I considered the mental aspect as that little voice pushing me to finish, to go harder, try a little more, a little longer. It was just positive thinking.

Ironically one reason I walked was it helped me deal with change. When Jerry died last year going for a walk was one way I could think and clear my head. The extra oxygen helped too. This year when my son told me he wanted to start walking we did, he started slowly but being younger he adapted quickly. Our distances increased and it gave us both something we needed, time to talk about things including his father. He told me his plans to go overseas again and by the time he left he had lost nearly 30 pounds. The only physical difference I noticed was my butt wasn’t as loose anymore.

This summer I was doing well, even going for little one and two minute sprints during my walks. Then there were some big changes: my son left to work in Vietnam, I left my job, and I moved. So I stopped walking, it was time-consuming and I had to pack and sort Jerry’s things. There were more important things to do. Being summer it was also hot, even in the evening it was in the 90’s..

I quit for two months, then started again in a half-hearted way. Sometimes I walk three times a week, sometimes just once. I gave up yoga because I couldn’t afford it anymore.  I’ve been lazy, finding reasons to not walk. I can, I know I need to and I know it’s good for me but I can’t find the motivation to go.  This is when I learned that mental strength is important , without the will there is no way the body will follow. It’s a heckuva way to learn a lesson.

I walked today, a short walk, because I was forced. I put on my walking clothes this morning  thinking it would push me into going. It didn’t, I made some weak excuse and it wasn’t until my sister pointedly asked me if I was going to walk, so shamed into it I did. I still didn’t feel like it, the day was warm but there was a cold wind blowing. I went anyway,  I felt better after but I know I’m a long way from being where I need to be mentally. If I can get that back the physical part will be easy.

I’ve spent more money shopping online than I have in real stores. It’s a wonderful set -up for introverts; you don’t have to deal with other people, can look at whatever you want and do so without putting on shoes or makeup.  It gives you access to things not available in your tired sad local stores and most of it is on sale. No Christmas music. All you need is a valid credit card.

It’s great and dangerous at the same time.

So far I’ve bought small stuff–dishes; t-shirt; a phone charger; some earbuds; bath gel; lotion and towels. This is only because I’m not rich enough to actually buy all the stuff I looked at, put into my cart and then removed. Some things I won’t buy online, even if I had the money. Like luggage, I realized this when I looked at the real life version versus the online image and saw why some of it was so darned cheap. The same goes for most jewelry, but that’s about it. I realized I could furnish a whole house, even landscaping and some groceries, all online. If I wanted to, that is.

I don’t have a lot of people to buy for and that should make me feel sad. It really doesn’t, as I am broke and can’t afford it, not really. I’m going to make Scooby Snacks, my version of Chex Mix, for Christmas presents and that’s going to be it. My trip to Vietnam is costing me, being unemployed is really costing me and people are just going to have to accept my piddly gift or go lump it. I don’t care,  I won’t be here anyway.

Being broke any time of year sucks; the holidays just make it harder. For families with kids it’s much worse, I know we had some lean Christmases but there are people who have it worse than we did. Which is why this Giving Tuesday thing bothers me. It’s not that I don’t want to give, that I’m a greedy, selfish person. I’m a broke person. But I am selective about who I give to, I am a sourpuss who says no to big charities like the Red Cross and PETA. I rather give my money to local charities like Second Chance Animal Sanctuary, the Central Humane Society, Sister BJ’s Pantry and our local Catholic Charities, PBS and ACLU. KGOU and KNHC in Seattle, I’d like to know I would continue to have access to good radio as well.  Oh heck with it, even my cheap butt can pony up five bucks for each of these. That’s forty bucks, what I could have spent on something I didn’t really need; it’s two months of pedicures. I guess I can have ugly feet a little longer. If I am better off financially next year (I’d better be) I want to give more.